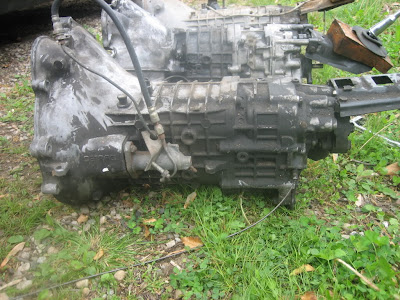 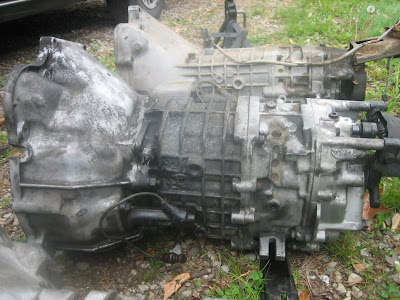 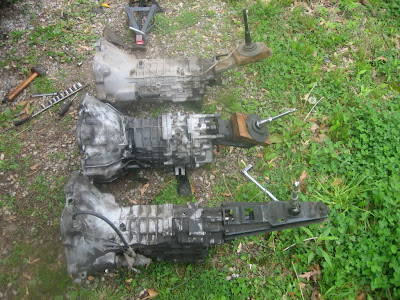 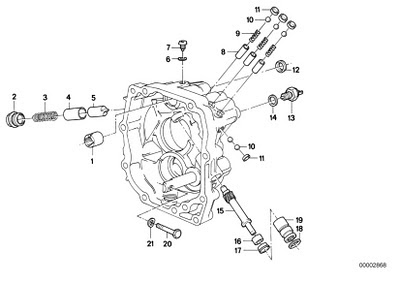 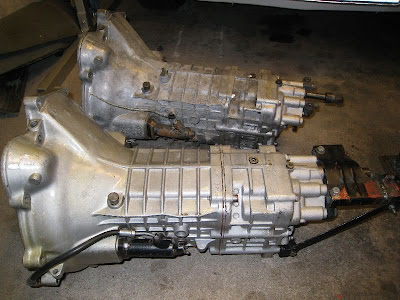 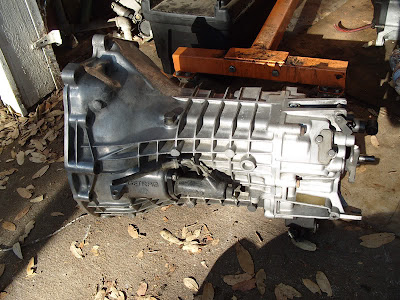 The Getrag 235/5, optional close ratio 2002 5 speed:
The 235/5 gearbox was the factory optional close ratio five speed gearbox for the 2002. These units are fairly rare. A guess is that there were perhaps 2000-3000 of these units produced. This transmission was an option even on the 2002 Turbo. If you have one, or know where one is, consider yourself lucky! If you have one, and it needs rebuilding, prepare to spend some money and encounter lots of frustration! This gearbox is used primarily for track type events and for people searching for the best performance and overall gear selection. It is well suited to cars with heavily modified motors which have a narrow powerband. Most street applications are more suited to the five speed overdrive gearbox. Some parts can be found for the 235/5, but most of the rebuild items that still exist have to come directly from Germany. Unfortunately, a large amount of core parts for these gearboxes are NLA. If you are in need of major parts for this transmission, you may be out of luck. These transmissions are 3.0625 (3 and 1/16) inches longer than the 4-speed, and need the associated hardware adjusted accordingly. The clutch slave cylinder is mounted in the same manner as a standard 2002 four speed.
There are several easy ways to identify a transmission as a close ratio five speed. First, the front housing is identical to a 2002 four speed. There is an added cast aluminum section sandwiched between the front housing, and the rear cover. On the top of the transmission located on this additional sandwiched housing, there will be some numbers stamped. The first is a serial number, ending with a /5 (to designate five gears). There will also be a 235 or 238 number stamped on the cast sandwiched housing nearby. This gearbox also uses the racing style shift pattern, with first gear to the left and down, under reverse. The Dog leg layout gearboxes are desirable on performance automobiles because in road racing more frequent shifting occurs from second to third than from first to second gear.
Apparently, there were additional gearsets available from the factory (or Getrag) for racing applications. These are extremely rare (even more so than a regular 235/5 box). Nevertheless, they represent some interesting gearing possibilities for a 2002. The race version uses dog type synchros, much like the racing Hewland gearboxes. With this setup, you just bang it into gear and go. They're not very forgiving, though. The ratios for all three gearsets are listed below.
The street version is the one that is (relatively speaking) commonly available. Another thing to note, in perhaps a bit of irony, is that the 235/5 has not proven itself to be a very strong transmission. Broken gear teeth are not all that uncommon on 235/5 units that have led a hard life. The typcial mode of failure is a synchro will fail (usually as a result of over-exhuberant speed-shifting during a competition event), and parts and pieces of the synchros go through the gear mesh, taking out gear teeth in the process (this happened on the 235/5 transmission I have). Bearings (esp. layshaft) can fail as well.

More common 5 speeds:
The Getrag 245/4 overdrive five speed from the 1980-1982 320i is the most popular transmission used when installing a five speed into a 2002. The gear ratios are:
The overdrive 5th really helps on the highway. This transmission is 3.5625in longer than the 2002 4-speed. (note that it is longer than the CR 5-speed) The clutch slave cylinder is mounted "backwards", in the 320i style. With a 3.64:1 final drive, and 185/70-13 tires (a theoretical diameter of 23.2 inches) this combination will give 2560 rpm at 60 mph. A nice relaxed cruise speed. Even better, at 80 mph, the engine will be turning at only 3400 rpm. This transmission can be coupled with a 3.90:1 final drive, to mimic the '80-'83 320i's. Acceleration through the gears will be better, and the overdrive 5th brings the revs back down to sane levels on the highway. This setup will, of course, rev higher in any given gear than with the 3.64:1 final drive. Using a 3.90:1 final drive and 185/70-13 tires, 60 mph will theoretically give 2750 rpms in 5th, and 80 mph will give 3660 rpms
The Getrag 245/10 close ratio 5 speed can be found on some european 320's. Nowadays, this is usually the close ratio gearbox of choice for conversions
This is probably the better of the two close ratio transmissions to use, as it is of the newer, stronger 242/245 series design. It uses the stronger Borg-Warner style synchromesh. Plus, parts for this transmission will very likely be easier and cheaper to get in the future. The catch is finding one in the first place. This transmission is very much like the 245/4 OD trans, except that it is 3.125 inches longer than the 242 4-speed, not 3.5625in.
Not listed here is the Getrag 240 overdrive 5 speed found on the '83 320i and '84-'85 318i, as it is almost identical, ratio-wise to the 245/4. It is also of a lighter, weaker design than the 245/4. It is therefore not a good choice when mated to a modified performance engine. Installing one in a 2002 is also slightly more of a challenge, due to it's extra width and lack of an available 4 bolt output flange.
It is also noteworthy to point out that the newer E36 318is gearbox is not a close-ratio unit. The first 4 gears are shortened such that 5th can be made direct and push through a relatively high-geared final drive, simulating a wide ratio overdrive 5-speed pushing a regular final drive. This improves overall efficiency in 5th gear by reducing frictional and gearing losses.
Posted by david at 11:20 PM