do dirty hand = a clean heart?

the other day i gave the 320i a significant portion of my attention...and as i worked on the car i noticed that as the day progressed and my hands touched so many of the dirty things in my life/garage...and yes, there are other dirty things that are not in the garage...i noticed that my hands became increasing dirty...after a day of applying my hands, my mind wandered...how my hands had become dirty as a result of the machinery i had touched...the machinery had become filthy over the last 31 yrs...i also have a 1929 model a ford roadster...that was purchased when i was 12 yrs old...with my father in mt. airy maryland...my hands were like his in that they were soiled...he lived in a world of dirty hands...machinery was the focus of his peers too...

after thinking of the many memories i had with him i began thinking about old other father's...ancient ones...who lived closer to the ground...in an agricultural society...not a mechanical society...and certainly not in an information society...i thought about how generations before me came from societies of dirty hands...their hands were soiled but it was not grease it was soil...

this week for the first time i have considered wearing gloves the next time i do mechanical work so that my hands are not soiled...this might be evidence of my migration from one cultural foundation to another...much like the church is transiting from/out of evangelicalism (modern) into something postmodern...so it seems with the church...changing...morphing...from movement to movement...as it is in the garage...
Posted by david at 6:39 PM No comments: Links to this post 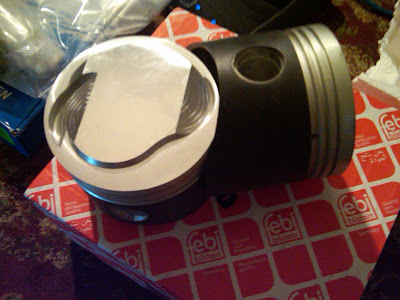 ok so i started this blog with the anticipation that i would track the dismantle and assembly of the 320i . . . thus far i have been far more consumed with the actual work instead of documenting the steps involved i have been busy either working or recovering from the work . . . so . . . today is a day of new beginnings . . .

at around 5:45 tonight jonathan, noah, and owen were in the driveway working on the installation of kenwood speakers into the back of jonathan's honda civic . . . as the frustration was peaked to the point that dad was needed for direction the brown ups truck came into sight . . . that's unusual because where we live is at a cross roads and when i saw the brown ups truck i knew he was headed to our house . . . he had 3 boxes for us . . .