ah, huston i think that we have a problem here...50 miles from home we blew the head going up a mountian... 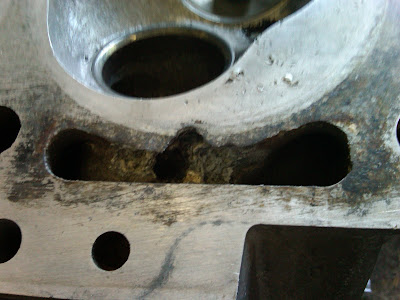 it was a foggy morning...around 8:30am EST as Jonathan slept in the passanger seat we had driven all night...full of coffee we moved with the flow of the morning rush hour traffic...the car comfortably cruised at 75 mph effortlessly...the majority of the trip was over...we would be home soon...that meant well before lunch...we were about 75 miles from home as we began to pull that last big mountain toward our appalachian destination...this particular mountain was the last...and on the other side is the ohio river...i noticed that the while the car had no issues at all pulling through the desert at 116 degrees in the shade...no issues...did i mention that...the water temperature gauge was solid...periodic checks of the water proved no leaks either...i thought that we were good to go...but this last mountain just before stubenville, ohio was our undoing...as we ascended the top of the mountain the water temperature ascended with us...the mechanic in me thought..."well, since we are almost at the top, it will cool as we descend, and i'll check it at the bottom of the hill.."

well part of that was true...since we were almost at the top it did cool as we descended...however, as we float through town we escaped all the red lights (2-HA!!) but at the last light we got caught...and as we sat there i watched the temperature gauge climb...i knew we were about to get out of the car...i woke Jonathan and said: "houston, i think we have a problem!"...i watched the signature white steam coming out of the exhaust and i immediately killed the engine and pulled to the side of the road immediately...popped the bonnet and got my cell phone...i suspected that it was a blown head gasket...i would later find out...that was not the case, instead the coolant chamber had eroded and allowed water to leak into the combustion chamber...more on this development would come later!

after several calls to friends with tow trucks and roll-backs...i finally got a hold of a guy that was loading the bmw in just over a half hour!!! we were 50 miles from home...we drove from stubenville, ohio to the pittsburgh international airport so that i could pick-up my truck that we had left at the airport on the way to california...we were home in another half hour and the rest is history as they say...the end!
Posted by david at 11:47 PM No comments: Links to this post